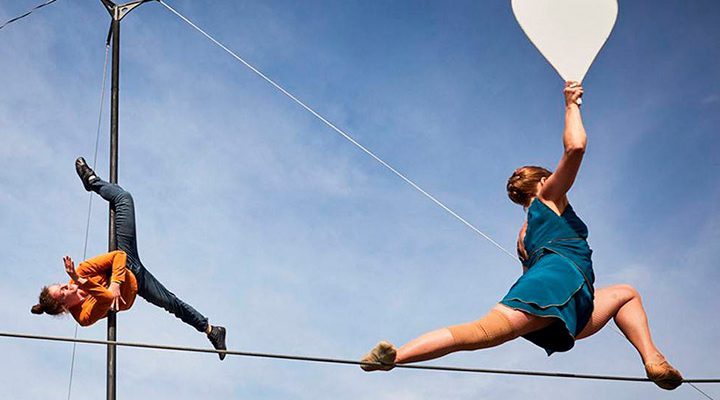 „Meandres“ – the new creation of Les Colporteurs – makes movement meet the universe of a sculpture-structure : L’Etoile.

The sculpture-structure “L’Étoile” was created in 2007 as a result of a collaboration between the tightrope walker Antoine Rigot and the scenographer Patrick Vindimian. “L’Étoile” became the universe and source of inspiration for several short funambulist plays, which together constituted a singular repertory of performance for public space. In 2018, a mast was added to the structure and Méandres was created.

In this performance, the vertical and horizontal meet, building the frame for an introspective dialogue between a woman and her conscience. L’étoile-mât, the structure on which the bodies move, is also a musical instrument. Four pickups skillfully positioned on the structure capture vibrations, shocks, and frictions of sliding hands, feet, and bodies.

The regional tour of Méandres is supported through Teatroskop Grants 2022.