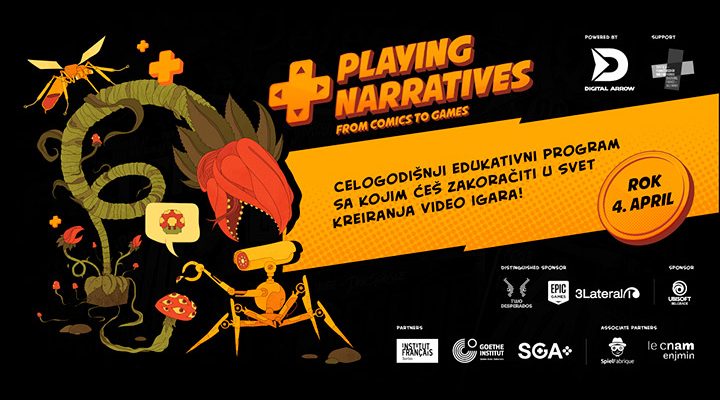 The “Playing Narratives” program is aimed at comic artists, illustrators, animators, creative writers and other young creatives who are professionally interested in developing video games. This is made possible for them through this eight-month program consisting of training, mentoring and joint work. This program is a joint initiative of the Institut Français and the Goethe-Institut as well as the Serbian Games Association (SGA) and is supported by the Franco-German Cultural Fund, the Digital Arrow company and other partners from France, Germany and Serbia.

This is an almost year-round training, mentoring and production program that is intended to introduce around 15 participants into the gaming world, while exploring points of contact between this area and the comics domain. Both have in common visual storytelling, character development, creative writing, « word building » and many other techniques and methods, whereby one of the goals of this project is to « liven up » individual comics, the interactive versions of which are to be created through the development of holistic gaming concepts.

The Playing Narratives program is particularly aimed at comic artists, illustrators, animators and creative writersas well as all those who deal with computer modeling or sound design . In short – the target group includes everyone who can be a valuable member of a team developing a concept for a video game, as well as those who want to develop personally and professionally in this direction.

The selected participants will therefore take part in lectures and workshops that are devoted to the following topics, among others: history of gaming, narrative design, character development, game and level design, game art and animation. Technical (game design) and entrepreneurial as well as marketing-related aspects of gaming, user acquisition and other important topics are also discussed. In addition, the acquisition of soft skills is encouraged, such as team culture and presentation skills. Some lectures will also be open to the wider community in the form of hybrid or online events.

The Playing Narratives program is a joint initiative of the Institut Français and the Goethe-Institut Belgrade, in collaboration with the SGA (Serbian Games Association). This project is supported by the Franco-German Culture Fund, which was founded in 2003 on the occasion of the 40th anniversary of the signing of the Elysée Treaty. The main objective of the fund is to strengthen Franco-German cooperation by supporting cultural and art projects that are carried out jointly by the diplomatic missions and cultural institutes of both countries, in close cooperation with local partners.

This project is also supported by numerous partners at home and abroad: the general sponsor of the project is the Digital Arrow company from Novi Sad, in addition to these two most important partners, the local companies Two Desperados and 3lateral are also involved as dominant co-sponsors in the implementation of the project, as is Ubisoft Belgrade as a simple sponsor. Renowned organizations from Germany (the Accelerator Spielfabrique) and France (École nationale de jeu et des médias interactifs numériques Cnam-ENJMIN) and their experts and teachers are also involved in the implementation of the project.